Researchers at KI Robotics entered CES 2022 Autonomous Racing using their Indy AV-21 autonomous vehicle and competed with the world’s top researchers. Our team developed a cutting-edge autonomous racing software stack from scratch and successfully finished the race as a semi-finalist, only to lose to the top European teams.

Researchers at KI Robotics made it to the semi-final at CES 2022 Autonomous Racing Competition. The primary goal of this competition is to stimulate the research community to challenge themselves for the development of autonomous driving at a very high speed, which demands cutting-edge technologies for all aspects of autonomous driving, including sensors, localization, vehicle control and others. During this event, a total of nine top research universities from countries all around the world (including Korea, Germany, Italy, and the United States) participated in the final stage of the competition, developing software capable of controlling a fully autonomous race car in head-to-head races.

The competition was held at the Las Vegas Motor Speedway on January 7th. Each one of the nine racing teams received a vehicle, an IAC Dallara AV-21 which can reach speeds of up to 280 kph, and had to build their own software stack to make the vehicle drive autonomously. To compete in the final race, each team had to demonstrate their capability of overtaking and performing high-speed time trial competition to determine their seed in the head-to-head phase. Out of the nine competing teams, five teams including Team KAIST qualified for the final race.
“We were able to design a full-stack autonomous racing system based on various in-house solutions of perception, planning, and control developed from urban autonomous driving research over the past decade. Considering the characteristics of high-speed driving as a safety-critical application, we focused on developing vehicle dynamics-based control and planning algorithms as well as resilient pipelines to always keep the vehicle under control,” said Calvin Chanyoung Jung, team leader and Ph.D. student in the USRG lab.

The race was conducted as a single-elimination tournament consisting of multiple rounds of matches. Two cars took turns playing the role of defender and attacker, and each car attempted to outpace the other until one of the two was unable to complete the mission. Team KAIST successfully overtook its first competitor, Autonomous Tiger Racing (Auburn University, USA), which was driving at 130 kph and advanced to the next round. The next competitor was team PoliMOVE from Politecnico di Milano, Italy. Team KAIST successfully completed the passes, reaching speeds up to 220 kph.

“Currently, the maximum speed limit on highways is set by human perception and control abilities, not the vehicle performance. We believe that high-speed autonomous vehicles will become one of the forms of future mobility” said David Hyunchul Shim, professor of electrical engineering at KAIST.
“Competing in this challenge has been a priceless experience. We had the opportunity to demonstrate the robustness of our technology and to see our robot overtaking the others at unprecedented speeds. All of this effort will drive us closer to a future where fully autonomous cars will be just a common means of transportation.” said Andrea Finazzi, team member and M.Sc. student in the USRG lab. 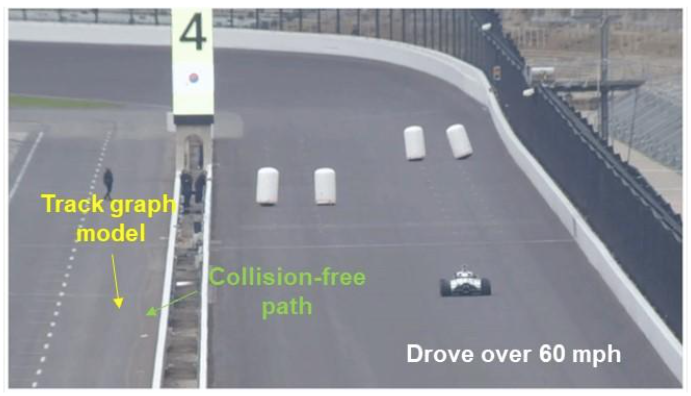