Hybrid halide perovskite has established its position as an emerging photovoltaic material due to its outstanding properties such as low density of defects, long carrier diffusion length, and high absorption coefficient across the visible light spectrum. Power conversion efficiency (PCE) of perovskite solar cells (PSCs) has rapidly grown in the past few years, achieving a value of over 23 %. However, as the competitiveness of solar cells is determined by cost per unit power, large-area scaling of PSCs in a facile and cost-effective manner is of critical importance to transition PSCs from laboratories to commercial products.

Most high-performance PSCs have been demonstrated by spin-coating a perovskite layer. However, spin-coating has an intrinsic limitation in terms of large-area scalability; as the area of the substrate increases, coating the perovskite layer uniformly becomes exceedingly challenging. Furthermore, the majority of the precursor solution (>90 %) is wasted during spin-coating, which will inevitably raise the fabrication cost of PSCs.

In order to overcome these limitations, a variety of scalable coating methods have been developed. Doctor-blading, in particular, is the most widely used coating method for large-area deposition of perovskite thin film. Prof. Byungha Shin and Prof. Steve Park from the Department of Material Science and Engineering at KAIST have worked with other co-workers to generate a thin film of perovskite CH3NH3PbI3 (MAPbI3) over a large area in a facile and cost-effective manner through a technique known as solution-shearing, a coating technique analogous to doctor-blading.

The research team observed that the morphologies could be divided into four distinct phases. Formation of these phases was attributed to a delicate balance between the rate and state of supersaturation and the supply of solution to the meniscus, which dictates the nucleation and the crystal growth process. We have also observed that at a given temperature (150 oC), texturing increases with increasing coating speed, as evidenced by X-ray diffraction analysis. At an optimal morphology, PCE of 15% was achieved, which was comparable to that of spin-coated PSCs. Finally, a uniform perovskite film with an area of 57 cm2 was deposited.
This work was published in Journal of Materials Chemistry A (J. Mater. Chem. A, 2018,6, 24911-24919).

The teams projects that their analysis of crystallization mechanics and thin film morphologies, and demonstration of large area uniformity, will be highly useful for further development and eventual commercialization of PSCs in the near future so that CO2 emission can be reduced via decreasing use of fossil fuel. 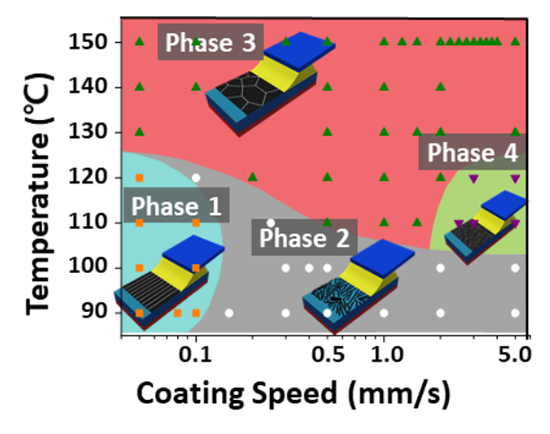