Using metamaterials, scientists have found that the polarization state of light can be manipulated with extremely broad bandwidth capability. It is expected that this technology will lead to the realization of broadband optical devices. The study documenting these findings has been published in Nature Communications.

To manipulate the polarization of light, researchers employed wave plates or optically-active chiral materials. However, the strength of the optical activity in natural chiral media is small and dispersive, thus rendering broadband polarization rotation inefficient with natural chiral media. Utilizing strongly-resonant chiral meta-molecules as subwavelength metallic chiral structures, the limitations of weak optical activity can be overcome. Yet, despite the unnaturally strong chirality of resonant-type chiral metamaterials, highly-dispersive optical activity and the corresponding narrow transmission bandwidth continued to deter the achievement of broadband polarization manipulation.

In the present study, Professor Bum-Ki Min from the Korea Advanced Institute of Science and Technology (KAIST) and his research team found that meshed helical structures, in which subwavelength-sized metallic helices are interconnected with four-fold rotational symmetry, can rotate the polarization of light without any dispersion. Using a super-thin metamaterial less than one-tenth the thickness of the wavelength of the light, they demonstrated theoretically and experimentally that polarized light can be constantly rotated regardless of the wavelength used.

The meshed helical metamaterials were found to rotate the polarized microwave within a range of 0.1 GHz to 40 GHz by 45 degrees regardless of its frequency. This non-dispersive property is quite unnatural because it is difficult to find a material with properties that do not change in such a wide range of wavelengths. In addition, the research team found that the strength of this broadband rotational property can be easily tuned by engineering the geometrical parameters or adding a number of metamaterial layers.

Min said, “As the technology is able to manipulate the polarization of light in extremely broad wavelength ranges, it will lead to the development of ultra-thin broadband optical devices.” 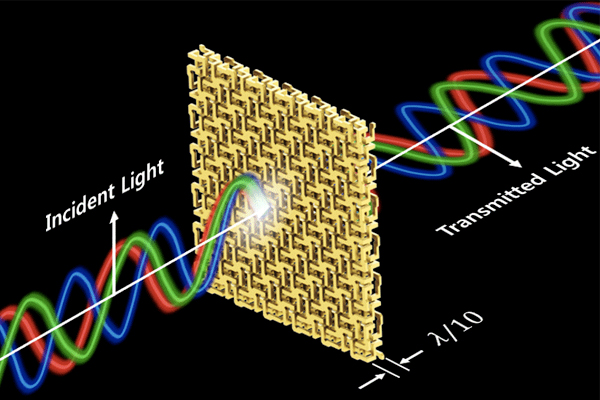